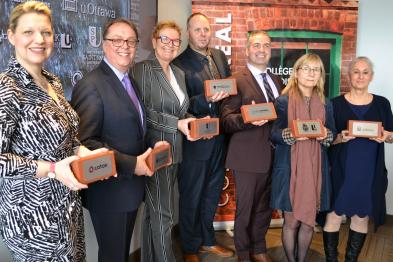 TORONTO, ON – at the Ontario Council on Articulation and Transfer (ONCAT)

French-language and bilingual Canadian universities contribute to the construction of Collège Boréal’s new campus in Toronto.

More flexibility and opportunities for students

These partnerships will improve program offerings on campus: because their college credentials will be recognized by partner institutions, Collège Boréal students will have the option of pursuing a baccalaureate on site, at the Distillery District campus in Toronto.

These partnerships aim to create bridges between college studies and university studies. In the preferred model, known as “2+2”, after two years of study in an approved college program, students receive a college degree and are eligible for a baccalaureate after two additional years of study in a university program corresponding to the completed college program. Other models will also be considered.

This partnership model will also save Collège Boréal’s students valuable time in the pursuit of their formal education, not to mention that by reducing the duration of their studies, they can save thousands of dollars.

At least two programs per university

The university partners will have exclusive rights to offer a minimum of two programs each. These programs will be announced by the universities in due course.

Collège Boréal is in discussions with other potential partners with a view to offering even greater access to programs leading to baccalaureates at the Distillery Campus in Toronto.

Collège Boréal’s Toronto campus is scheduled to open in September 2021.

“The Ontario Council on Articulation and Transfer is responsible for the development of a system that responds to the needs of Ontario students. As such, it is pleased to join its partners in the celebration of these unique partnerships which will pave the way to many opportunities for francophone and bilingual students in Ontario.” - Yvette Munro, Executive Director of ONCAT

“The college which we are building in the Distillery District in Toronto is anchored in the 21st century and will be equipped to respond to the urgency of the unprecedented changes that the labour market will face in the next decades. By forming bold partnerships with established Canadian universities, we are inventing a model that will offer to our students a strong and comprehensive set of programs which will help them join tomorrow’s competitive workforce.” - Daniel Giroux, President of Collège Boréal

“As the Centre of Excellence for French-language and Bilingual Post-secondary Education in southern Ontario, Glendon College at York University is delighted at this opportunity to strengthen its partnership with Collège Boréal through future articulation agreements. This innovative model contributes to the consolidation of an ambitious range of French-language programs tailored to the needs of the Toronto area.” - Ian Roberge, Co-Interim Principal, and Dominique Scheffel-Dunand, Co-Interim Principal, Glendon Campus, York University

“Laurentian University and Collège Boréal are pillars of French-language education in Ontario. The strong links between our two institutions have led us naturally to this partnership. By joining forces, we help Francophones in southern Ontario to access quality higher education programs. By improving the range of French-language programs in Ontario, we are contributing to the economic growth and vitality of the province.” - Yves Pelletier, Associate Vice-President, Academic and Francophone Affairs, Laurentian University

“I am delighted with this collaborative agreement with Collège Boréal, and I thank them for giving the University of Moncton the opportunity to contribute to the French-language education of students enrolled in programs that will be offered on its Toronto campus. This association between Collège Boréal and the partners to this agreement is based on an innovative vision of post-secondary education, and I am convinced that it will be very successful.” - Jacques Paul Couturier, Interim President and Vice-Chancellor, University of Moncton

According to the Key Performance Indicators recognized by the Ministry of Training, Colleges and Universities, Collège Boréal holds the top rank in three of the five areas surveyed: graduation rate, graduate satisfaction, and for a third consecutive year, student satisfaction. These results are proof that investing in human capital is Boréal’s strength.