The “Pathways for Indigenous Learners” project, officially started in August 2014 through ONCAT funding, is the first ever indigenous-centred transition pathways model for indigenous transfer students in Ontario. The need for this pathway came out of community discussions on the lived experiences of Indigenous Peoples as learners, scholars, educators, and advocates, in public education systems across several jurisdictions. 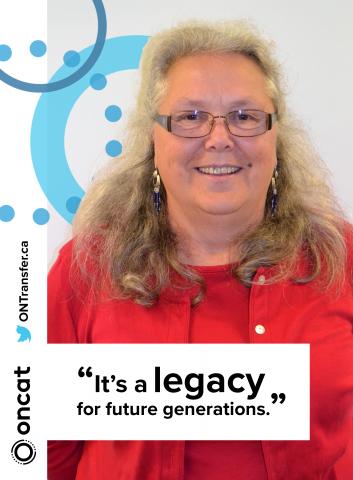 The Indigenous Studies, Environmental, and Social Work programs were considered for the pathway due to their high-affinity among the three different postsecondary learning systems involved. However, it was the use of the Indigenous Learning Outcomes (ILOs), developed at Confederation College in 2007, that made the curriculum alignment clear, and resulted in an integral shift in project perspectives. Before the ILOs, “we were working from Western frameworks…trying to make it fit” remembers Dr. Helmer. Applying a culturally-informed strategy made way for the recognition of “where we’ve come from…our own histories,and our own legacies, in our families, and in our communities”.

B. Small echoes this, reflecting on how the legacy of the Indian Residential school system, and the existing “systemic racism in the public education system”, impact the barriers that exist for indigenous learners today. Dr. McCaskill acknowledges that the indigenization of academia must go “well beyond the indigenous studies department”. Underlying this all, B. Small states that “there needs to be a principal, or an ethic, towards a duty of care towards indigenous learners in Canada”; otherwise, “we’re going to continue to have the gap in attainment,…the underfunding, the underrepresentation of indigenous learners, and…stop-gap measures”. Creating pathways framed in a positive way, that respect indigenous knowledge, is a way of “affirming the traditions of our people” and bringing those traditions “into a public discourse…[and] articulat[ing] new directions in education that are long overdue”. 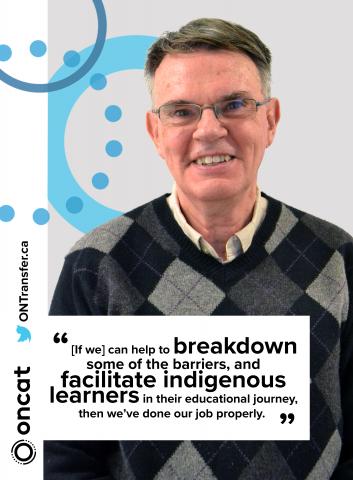 It is clear that transfer holds a lot of promise, beyond just the credits awarded. Mobility affords individuals the opportunity to explore multiple academic and community settings, and to find likeminded thinkers. Dr. McCaskill suggests that there is also much that institutions stand to gain, as evidenced by the project’s expansion “from three institutions to about twelve”. While the institutions who have partnered for this project have each their own mandate, identity, and long history of work in the field of indigenous education, coming together to work collaboratively has enabled a breaking down of barriers for learners in a way that was previously impossible. The “collaborative, non-competitive process…has lent itself to a climate of tremendous innovation” says B. Small.

What we stand to gain is huge. Dr. Helmer believes that “the more we continue to build that scaffolding around the pathway[s]…the easier it’s going to be for learners to see this system as something they can be part of, in a way that is productive and important”. The increased ability to choose leads to “an increased democratization of education” and “empowered learners”, says B. Smalls, and “the end result is that there’s going to be greater contribution overall”.

Listen to the full interview via the podcast

Interviewed: (members of the Project Coordinating Committee)
Brenda Small, Vice President of the CPAL at Confederation College in Thunder Bay
Joyce Helmer, Curriculum Specialist and lead for teaching, learning and innovation initiatives at FNTI in the Tyendinaga Mohawk Territory
Don McCaskill, Professor of Indigenous Studies at Trent in Peterborough